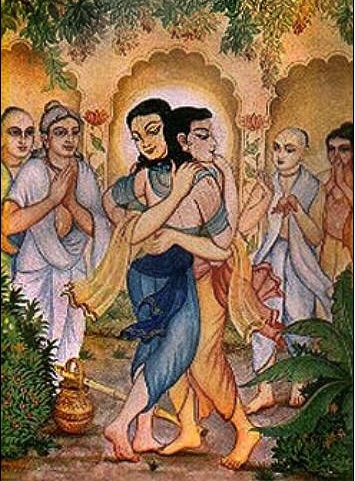 Sri Nandana Acarya
Nityananda Takes Refuge of His Home
There are many things that can (and will) be said about Nandana Acarya. But it is interesting that each of the Mahaprabhus—Chaitanaya, Nityananda and Advaita all at one time or another, for one purpose or another, hid out at the house of Nandana Acarya. How dear he must have been to these three that each sought shelter at his home when they were either trying to test the Lord, trick the Lord, or test and trick the devotees.
The first to seek out his shelter was of course Nitayananda. While wandering all around India in a deep mood of separation Nityananda ended up in Vrindavana. It was by the way, while traveling in this manner he met Madhavendra Puri. While in Vrindavana he came to understand that Mahaprabhu had appeared in Navadwip Mayapura. The Lord had appeared there as Gaura Hari, the son of Saci. Nityananda at once went their but stayed out of sight, incognito at the home of Nandana Acarya.
It can be noted here that Nandana Acarya was a bit older having been there for the birth of Gaura Hari. Of course, Sri Nandana Acarya felt his entire life had been fulfilled once he laid eyes upon Nityananda Prabhu. What to speak of gain an opportunity to actually serve the divine Nitai!
Now, through a dream, Mahaprabhu knew that Nityananda was in Navadwip. He sent Srivasa Pandit and Hari dasa to go and find Nitai. They returned saying Nityananda must not be in Navadwip as they could not find Him. Mahaprabhu simply smiled to Himself and took the devotees with Him to the home of Nandana Acarya.
When the entourage met Nityananda they were amazed to see a personality who was as effulgent as a million suns! But Mahaprabhu sought to reveal the real identity of Nityananda. He then signaled to Srivasa Pandit to recite a particular verse from Srimad Bhagavatam.
“Krishna, whose glories are sung to the world by the cowherd boys, dressed as a dancing performer, a peacock feather decorating his topknot, kinkara flowers behind His ear, a golden cloth covering His body and a victory garland around His neck, entered Vrinda’s forest, leaving marks from the pleasure garden of His auspiciously marked feet, all the while filling the holes of His flute with the nectar of His lips. “
When Nityananda heard this verse, His eyes rolled in ecstasy, He uttered the sound “Ha Krishna” and fainted. His body manifest all 8 symptoms of ecstatic pleasure. Mahaprabhu, anxious at being reunited with His brother, took Nitai to His chest and began to glorify Him to the assembled devotees.
Sri Nandana Acarya is fortunate indeed that these pastimes took place in His home.
Chaturatma2021-02-01T18:57:52+00:00
Go to Top