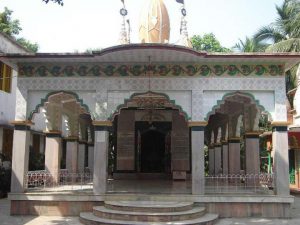 Sri Nandana Acarya
Mahaprabhu Takes Refuge in His Home
Good things are said to come in threes. Such is the case with the three great personalities hiding at the home of Nandana Acarya. We have spoken about Nityananda,s hiding and Advaita’s hiding. Today we will conclude with Mahaprabhu’s hiding at the home of Nandana Acarya.
During part of Mahaprabhu’s pastimes in Navadwip he engaged in public debate, for which he was very expert at due to his vast talent and learning. He defeated many brahmanas, smartas, and atheists. The atheists did not take this so well. Some of these local atheists decided to plot against Mahaprabhu. They fabricated various complaints and took these fabricated excuses and went to the local magistrate. (Side note—could this be the beginning of Fake News? Ha Ha Ha).
At any rate, after He returned home from His daily activities, he organized a massive sankirtan party with the goal of putting an end to the erroneous blasphemy of these atheists. But something interrupted His plans. As He organized the sankirtan the Lord noted that the bliss He usually felt from the Holy Names was not manifesting and He was not shy about making this feeling of a lacking public to the devotees.
Advaita Acarya gave the following explanation as to why this was His feeling today. “You have made Nityananda the keeper of the storehouse of love of God. Thus, in doing so, you have deprived myself and Srivasa of this love! Yet, on the other hand, you have given this love of God to everyone else, regardless of lower caste or higher caste. So, since I have been left bereft, I have personally dried up the ocean of your own prema. This is why you are not feeling anything today.”
Who can imagine how powerful Advaita Acarya is? Not only can he call the Lord to appear (as noted in the previous story) but if he feels neglected by the Lord he can dry up his ecstasy!
Understanding this to be the case, Mahaprabhu decided he could not bear another moment in this useless body that was devoid of prema. This being the case, Mahaprabhu went to the Ganga with the intention of drowning Himself. After Mahaprabhu jumped in, Nitayananda and Hari dasa Thakur immediately jumped in after Him and pulled Him from the water. Mahaprabhu then quietly revealed to these two alone, that He intended to stay out of sight of the devotees and go and hide at the house of—yes, you guessed it, Nandana Acarya. In this way, only Nityananda and Hari Dasa Thakur knew where Mahaprabhu was.
The other devotees could not find Mahaprabhu anyhere and began to consider if He had drowned. Thus, they felt immense separation from the Lord. Advaita Acarya took the matter most seriously and began a fast.
In the meantime, at the home of Sri Nandana Acarya, Mahaprabhu sat down on the throne of on the altar and engaged Nandana Acarya and his family members and household servants in many varieties of service. Mahaprabhu carefully instructed Nandana Acarya not to tell anyone that He was there. Nandana Acarya offered a very intelligent rebuttal. He said, “You my Lord are the wealth of the devotees hearts. The devotees are the ones who reveal You. How will You possibly be able to remain hidden from your devotees?”
This was indeed true. The Lord fully understood the inability of His devotees to bear the separation from Him. The pain of such separation was simple too much for them. Therefore, he requested Nandana Acarya, “Just go and bring Srivasa here.” Once Srivasa arrived, he recounted to Mahaprabhu how extremely upset Advaita Acarya was and that he had taken up a fast. When Mahaprabhu understood the determination of the Acarya, His heart was softened. He immediately went with Srivasa to the home of Advaita Acarya and saw indeed he was lying on the floor weak and faint. This caused Mahaprabhu to think Himself an offender.
Seeing the Lord, Advaita rose up from the floor and begged the Lord for forgiveness for his own rash and harsh statements earlier. Advaita Acarya then asked to be allowed a place at the Lord lotus feet so that he could serve Him birth after birth.
In this way Nandana Acarya was able to have an intimate and dear relationship with each of these divine personalities by providing his home as a place for their own pastimes of hiding.
Chaturatma2021-02-01T18:04:40+00:00
Go to Top