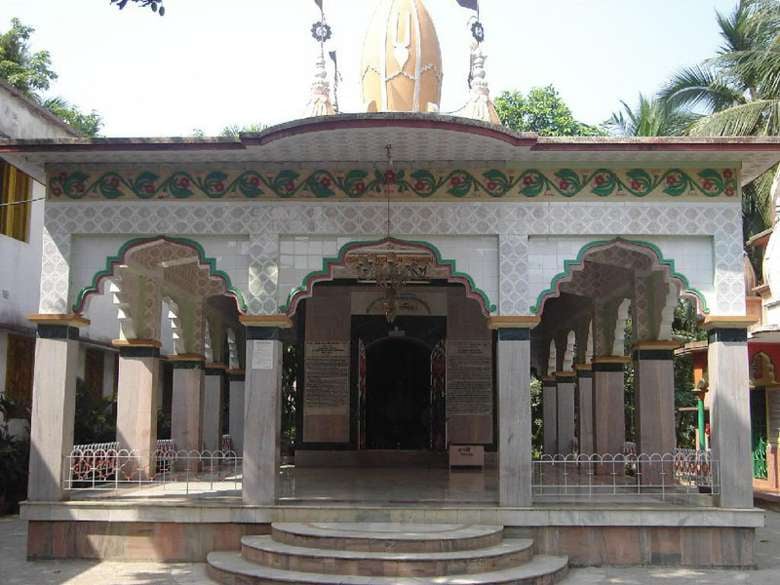 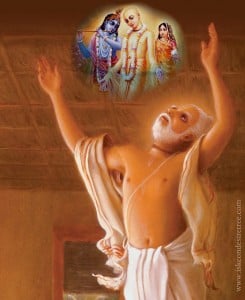 As noted, there are many things that can (and will) be said about Nandana Acarya. But it is interesting that each of the Mahaprabhus—Chaitanaya, Nityananda and Advaita all at one time or another, for one purpose or another, hid out at the house of Nandana Acarya. How dear he must have been to these three that each sought shelter at his home when they were either trying to test the Lord, trick the Lord, or test and trick the devotees.
We have already discussed Nityananda’s hiding there. Next in the transcendental hidout at Nandana Acarya’s home is Advaita Acarya.
Mahaprabhu held many amazing pastimes at the house of Srivasa Angam, one of which was his divine Vyasa Puja. One day shortly after this pastimes Mahaprabhu was absorbed in a deep mood of Divine identity. In this mood he ordered Ramai Pandit to go to the home of Advaita Acarya and tell Advaita of this divine manifestation He was showing. He noted that, “after all, it was Advaita himself that called me to come down from Goloka to this earth. His deep mood of devotion in his puja with Ganges water and Tulasi leaves gained my attention. It was his pleases for my advent brought me here. Now I have manifest in Navadwip and Nityananda has joined me. Therefore, tell Advaita that he should now immedeitaely come to Srivasa Angam with his wife and family member and all articles for worshipping me.”
Ramai Pandit acted according to the Lords instruction with great pleasure and joy in his heart. When he arrived, unexpectedly at Advaita home, the Acarya ask him, “Why have you come?” When Advaita Acaraya heard the full explanation form Ramai, he, his wife, his son Acyutananda and other followers all cried tears of joy. Gathering everything, as they had been instructed, the entourage left Shantipuri and made their way to Navadwip.
However, Advaita wanted to test Mahaprabhu. Who can understand the inner nature of the dealings between these Prabhus? Such is the way of their transcendental pastimes. To do so, he stopped and stayed hidden at the house of—–yes you guessed it, Nandana Acarya. Advaita told Ramai, “You go ahead and do not tell Mahaprabhu that I am here at Nandana Acarya’s. Instead tell him I refused to come at His request.”
Ramai did as requested by the Acarya. But alas, Mahaprabhu is the divine Supersoul in all beings and could understand the dealing of Advaita. At Srivasa Angam He manifested a majestic, divine form and instructed Nityananda to hold an umbrella over his head. He then engaged other devotees in various services of worship such as arati, bhoga, foot bathing and others.
After this puja, Mahaprabhu announced to all the assembled devotees, “Advaita Acarya has decided he will test me. To do so he is hiding at the home of Nandana Acarya with his family, followers and all the articles for my worship. I know order him again to come here.” Saying this, Mahaprabhu sent Ramai again with the request for the Acarya’s presence.
When Advaita Acarya got this direct order a second time, with great joy in his heart he very happily went to the home of Srivasa. As soon as he saw the Lord from some distance, he became motionless at the divine sight of Mahaprabhu. He then began to glorify the supreme mercy of Sri Chaitanya Mahaprabhu to the four directions.
The Acarya then began to wash the Lords feet, and worship him with pancopacara, the five articles of worship. These are noted as gandha-sandal paste; puspa-flowers and tulasi; dhupa-incense; dhipa-lamps; naivedhyam-foodstuffs. As he performed this worship he chanted the following mantra of glorification:
“Namo brhamanya-devaya go brahmana-hitaya ca jagad-dhitaya krsnaya govindaya namo namah
I offer my obeisances to Krsna Govinda, the lord of the brahmanas, the source of the cows and brahmana’s welfare and the source of welfare for the entire universe.”
After such worship in a joyful mood, Mahaprabhu commanded the Acarya to get up and dance. In spite of his senior years, Advaita danced wildly on and on up to the point that he became completely intoxicated. This sight brought a great flood of ecstasy to all the assembled devotees.
Thus again was the great fortune of Sri Nandana Acarya that his home was used to further the wonderful pastimes of Mahaprabhu and Advaita Acarya.

If you feel inclined to donate, or to help with the preaching or research services of Chaturatma Dasa, your contribution would be greatly appreciated.

Donate to Support a Sevaka